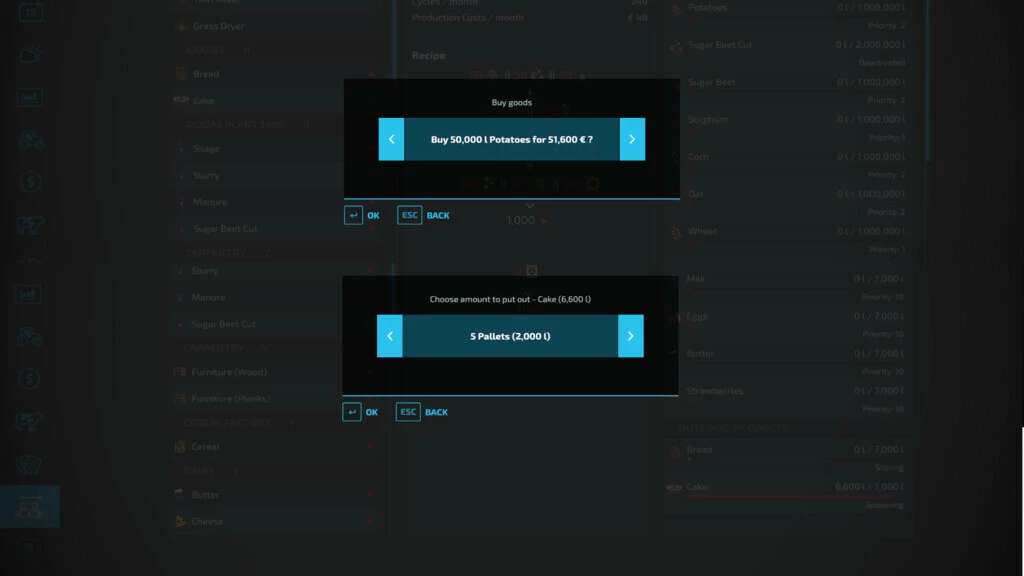 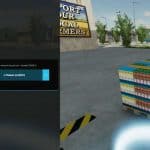 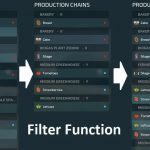 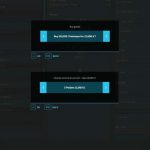 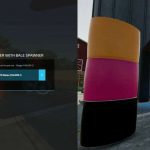 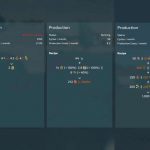 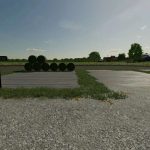 Version 1.3.1.0
Swap dialogues now with 1/10 steps
When swapping out seedlings, all tree species available in the standard seedling palette can be selected.
Fix for interaction with Pumps N’ Hoses DLC

A selection of features:
Automatically available for all productions:
Automatic line break in recipe display for input and output page (4 ingredients per line).
A colored display of the recipes makes it easier to see why a product is not producing. Where: white – available, red – not available but required, orange – not available and not required.
Possibility to buy goods in the production menu for production for double the market price.
Priority system: Incoming goods can now be set to different priorities via the production menu and will be distributed based on these priorities. The following applies: Priority 1 is most important and will get the goods first until the warehouse is full. Priority 2 only afterward, etc. Inputs can also be deactivated, in which case they will not receive any deliveries.
Only active production lines can be supplied via the distribution mode.
New output modes available: Sell Directly, Distribute, Outsource (Previously Keep), and Swap In (New). If production is set to storage, it does not automatically spawn pallets.
Added manual pallet, bale, and wood spawner – All productions with pallet spawner can also manually spawn pallets & bales – via the menu or a trigger.
Production delivery costs are now reported separately (previously part of production costs).
Productions that are mission objectives can accept unlimited goods from missions until the mission is completed. Mission goods no longer end up in the production itself during missions.
Display the maximum storage quantities and the corresponding units.
Sort productions alphabetically and filter by active/inactive.
In the case of productions, it is displayed whether they are running in parallel (II) or distributed (Y).
Own settings menu.

Must be actively installed in productions:
Recipes:
Recipes can be created with several equal ingredients in groups (maximum 5).
Multiple production lines that previously had to be created separately can be combined into one production line.
Ability to add one or more optional boosters that increase Outgoing Production.
Boosters can be disabled or reversed for individual goods.
Display the real current production depending on the booster. The current booster value is shown in orange brackets after the amount.
Ability to create recipes via FillTypeCategories.
Possibility of weather-dependent productions.
Possibility of weather-dependent filling levels.

Other features:
New FillTypes can be entered via Revamp at existing sales points without actively changing the existing sales points. A separate point of sale is no longer required.
Hidden productions with autostart function.
Various setting options for the above functions.
All are fully multiplayer-capable.
Own ingame help that explains the most important features of the mod.

A full list of options, installation help, and support is available from the Documentation:
This is just the script, the script alone does not change any production recipes! These must be created separately.

Version 1.3
Translations outsourced to separate files and new translations: Swedish and Russian.
Silo/Production spawn can now choose to spawn as bales, pallets or logs depending on what is available on the map. The selection is only displayed if there are several options.
“Store wood” is now displayed for a silo/production instead of “Sell wood”.
Added game settings
Correction of the purchase prices based on the economy settings (can be deactivated in the settings)
The selling price factor for direct sales from productions can be set
Changed bales from mods can now also be spawned
Bales are now displayed sorted by size when swapping out
Added conditional outputs
Production dependent on temperature, wind, sun, rain, season, and opening hours
Enables fill levels depending on temperature, sun, rain, and wind
Made color of silage bales selectable
Made production lines that are inactive/active hideable
Added ingame help

If you are face difficulties which are hard to overcome, check our Farming Simulator 22 Mods database and you will probably find a solution there. There additional files are extremely popular all around the globe. That’s definitely for a reason – every single Farming Simulator 22 Production Revamp v1.3.1 Mod is unique and provides you explicit options. If you wonder how it works, you will find plenty of information in our Farming Simulator 22 Mods website – we have collected all kind of data to make the gaming easier. If you are passionate about the FS22 Mods as we are, then you are on the right site. Take a deeper look at our offered samples and pick the needed one. Then all you need to do is simply click on FS22 Production Revamp v1.3.1 Mod free Download Button and implement it to your game. This few simple steps will lift your game to the upper level – what can be better that upgrading your game personally? Break all boundaries and develop your farm easily. That could be a great boost to your farm and there are no reasons why to react negatively. Take the best that you can and don’t look back – you must be orientated to the future and new experiences. That’s the only way to stay ahead of everything. If you see it as your goals, it’s definitely now or never!