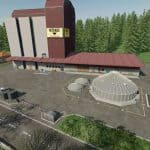 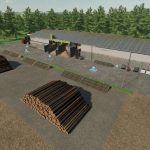 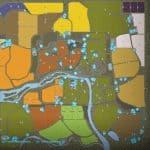 Today I have for you the 4x Map Department Haut Beyleron which means something like district Haut Beyleron. Before I say one or the other about the map, I would like to get rid of the urgent note that it is a BETA, and here and there not everything is ready. However, due to the many requests, I decided to publish the map.

In the Haut Beyleron district there are more fields and also the odd production (not all of them are implemented yet, you should wait before placing your own). There are now a total of 99 fields and some areas that can be used as meadows or commercial areas. The map has a large main courtyard in the center of the map and another standard courtyard more or less in each of the corners. There are 4 BGA’s and a 4x fermenter/weed dryer at the hardware store, but you’ll see. Since there are 5 courtyards, the game modes don’t work and all the courtyard buildings are there anyway. Currently, there is a large sheep pasture and cow pasture.

Currently, there is a hardware store with a fermentor/grass dryer, a large sugar factory, a large mill, a large bakery, a large oil mill, a food production facility, and a jam factory. More will follow, some buildings are already there. In big productions, there is always an extra sales trigger that has nothing to do with the production itself. Well, you know, you can’t sell anything in a production you’ve bought.

The 3 fields on the left in the north are for grapes and on the right for olives. For this reason, there are also corresponding packaging productions that can of course also be used as storage. You deliver grapes or olives and can then transport them to production on pallets or sell them.
The productions of the original map are still there.

If you don’t feel like having to start a new save game through updates, you should only download the map when it’s no longer a beta, otherwise, I hope you like the map so far and have fun.

If you are face difficulties which are hard to overcome, check our Farming Simulator 22 Mods database and you will probably find a solution there. There additional files are extremely popular all around the globe. That’s definitely for a reason – every single Farming Simulator 22 Departement Haut Beyleron (4x) v0.6.0.1 Mod is unique and provides you explicit options. If you wonder how it works, you will find plenty of information in our Farming Simulator 22 Mods website – we have collected all kind of data to make the gaming easier. If you are passionate about the FS22 Mods as we are, then you are on the right site. Take a deeper look at our offered samples and pick the needed one. Then all you need to do is simply click on FS22 Departement Haut Beyleron (4x) v0.6.0.1 Mod free Download Button and implement it to your game. This few simple steps will lift your game to the upper level – what can be better that upgrading your game personally? Break all boundaries and develop your farm easily. That could be a great boost to your farm and there are no reasons why to react negatively. Take the best that you can and don’t look back – you must be orientated to the future and new experiences. That’s the only way to stay ahead of everything. If you see it as your goals, it’s definitely now or never!